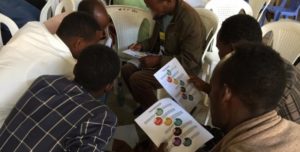 Let’s call him Abe (Not his real name).  He was in obvious pain. He shared how their place of worship had been constantly ransacked. The building had been set on fire eight times and they have had to keep rebuilding it. The government there is radical Muslim so they will not assist in protecting him or his congregation.
Because it is too expensive to have a home and the church, Abe and his family live within the church. One night Abe and his family were asleep and men broke into the church. They grabbed him and drug him into the road in front of the church. There they threw him on the ground and began to stone him. They threatened that if he didn’t pay them they wouldn’t allow him to live. He didn’t have the money they asked for but offered what he had. They then said that they wouldn’t kill him but he had to stop speaking about Jesus. During this attack his kidneys were damaged.
In spite of all these trials, Abe has not stopped preaching the good news. He shared how recently a soldier asked if he would pray for some of his friends. Abe went to the barracks with the soldier and the man had gathered 20 other men. There Abe shared the message of hope and love. He also prayed for a man who had was demonized. Eight men who saw the man delivered chose to follow Christ.