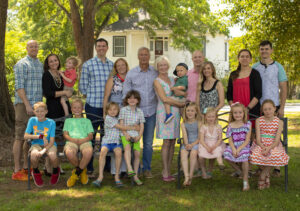 Bonnie was born in Charleston, SC, and Thor was born in New Haven, CT. Thor accepted the challenge of following Jesus while at Furman University through the Fellowship of Christian Athletes. After graduation, he went on to complete a Masters of Divinity at Emory University, and became a United Methodist Pastor. That same year after two dates, he asked Bonnie to marry him. They then spent the next 13 years in the Methodist church. In 1987, God called Thor, Bonnie and their three kids to plant a Vineyard in Augusta, GA, which started in their home with a handful of people. Over the next 16 years the church grew to over 750 people and planted five churches.

In 2003, Thor and Bonnie felt like the Lord said, “Do it again!” They turned the Augusta Vineyard over to their Executive Pastor and launched out to Charlotte. Worship Celebrations began in January 2004.  The Vineyard North Charlotte has planted two churches; Charleston, SC, and Palm Spring , FL.   It has also been responsible for five Vineyard Plants in Ukraine.  It is through the work in Ukraine that Thor and Bonnie met and adopted Vladimir, who is now married.

Thor has served as an Area Pastoral Coordinator and as the Southeast Region Church Planting Coordinator, overseeing seven states, for the Vineyard along with his experience in cross cultural training.  He has over 80 Vineyard Church Plants that he has either personally planted planted out of his church or  facilitated before GTN.  They are in the Southeast USA, Ukraine and Cuba.

In October, 2012 Thor & Bonnie  came  on staff with Global Training Network.  Thor took a pay cut, hired an associate to spend more time working with GTN.  He continued to be Lead Pastor at the Vineyard North Charlotte until July 2019 when he transitioned to full time with GTN. Thor is able to use his gift mix and 47 years of experience to empower and train  pastors and leaders and over 3000+ church planters, who have chosen, despite trials and hardships, to lead on in the Kingdom of God.

In 2006, Bonnie authored, Through the Looking Glass, the Journey of a Natural Blond and

has been active with Vineyard women on a regional and national level.
Bonnie is now a Broker/Realtor®  Bonniecolberg.com
If you are looking to buy or sell a house give Bonnie a call.  If you are not from the Charlotte area Bonnie can help by a referral to the best agent in your area  at no cost to you.  It’s a great way to help us fund GTN.  Thank you in advance.