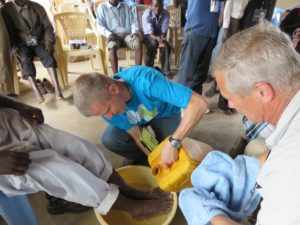 Here’s some news as of August 1, 2016:  “About 60,000 people have fled South Sudan since fighting broke out between rival army factions almost four weeks ago, the United Nations refugee agency said Tuesday.  About 52,000 people have gone to Uganda, 7,000 to Sudan and 1,000 to Kenya, the agency said.In all, almost 900,000 South Sudanese have left their country since civil war broke out in December 2013, the U.N. said. The country had about 11 million residents at the time.

A peace deal reached a year ago has been repeatedly threatened by fighting.  People fleeing South Sudan’s latest violence, which erupted in the capital, Juba, have reported being turned back by armed groups on the road to Uganda. “At the beginning, we did hear reports that the government was very reluctant to have people leave the country and was hindering people from doing so. Now that seems to be less of the case,” U.N. refugee agency spokeswoman Melissa Fleming told reporters, adding that other armed groups are involved. “But definitely it’s very difficult to leave without some cash to pay whoever is asking for it at the checkpoints,” she said. About 85 percent of the people arriving in Uganda are women and children, the U.N. said, adding that some children are severely malnourished.

Cholera is a growing threat for those who have stayed in South Sudan. As of the end of July, 586 cholera cases including 21 deaths had been reported across the country, said Fadela Chaib, a spokeswoman for the World Health Organization. Most have been in the area around Juba. In addition, many of the 250,000 refugees inside South Sudan from other countries have been affected by the latest fighting, the U.N. said.”**
**Associated Press writer Frank Jordans in Berlin contributed.