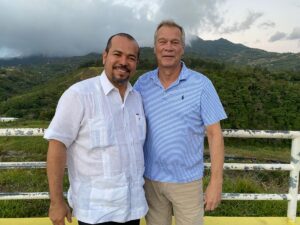 My last trip was for a seminar in David, Panama. Jason and I landed in Panama City and were told it would be a four hour bus ride to David.
It DID NOT turn out that way!
We took a bus to the Metro then to the mall where another bus terminal was located. This pre-ride journey was two hours by itself.
Finally, after an hour wait time, Jason and I headed to the rear seats on the bus. I laid my iPad down on the seat next to me. Then we decided to change seats.
Where’s my iPad?
A couple of hours passed, then I realized my iPad was gone. Uh oh! A rough gang-type guy was sitting in the seat I’d left my iPad in and I noticed he had moved to the front of the bus. He had to be the one that had my iPad!
There was another rough looking guy sitting in front of Jason and me. Using Google translate I asked if he knew the guy in the front of the bus because I thought he had my iPad. He responded, “Si.” Then I asked if he could go get my iPad back. He stood up, walked to the front of the bus and in around three minutes returned with my iPad.
I had been praying the whole time and was very grateful. Frankly, it was hair-raising, frustrating, and a very long bus trip.
On A Dark Street
We got off the bus in David on a dark street in the middle of the night looking for our ride that wasn’t there. We walked a few blocks and ran into Logman (pictured above). We were SO very glad to see him.
That “four hour” bus ride took 9.5 hours! Needless to say when the seminar was over we flew back to Panama City, Panama. Ha! That’s a story in itself and I’ll share it next time.
Somewhere In The World
I talked with Jason about a week ago. I shared with him that if we were not sheltering at home we would probably be lost somewhere in the world.
Thank you for sticking with us during this time of sheltering and uncertainty. Praying for you daily!
Blessings,
Thor and Bonnie